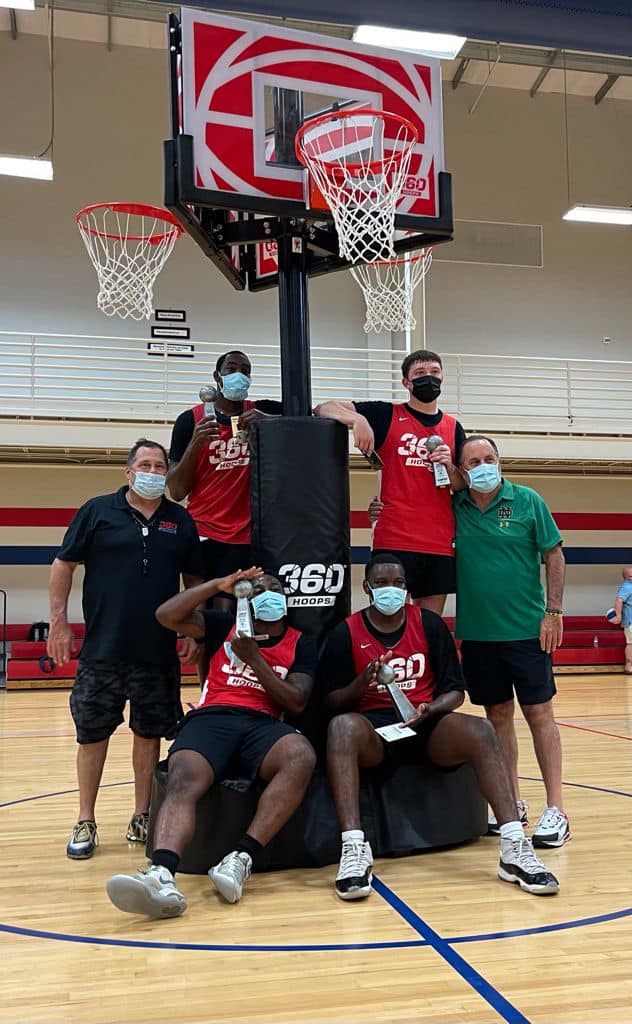 It was a day that 360 Hoops coaches and, hopefully, active duty personnel and their children won’t soon forget. On Sunday, August 29, 360 Hoops conducted an open tournament for 12 teams of soldiers and a youth clinic for more than 40 boys and girls at U.S. Army Fort Hood, highlighting the patented three-on-three version of basketball which features a patented circular court and three connected baskets and backboards attached to one pole.

University of Notre Dame Head Men’s Basketball Coach Mike Brey also took some time to meet the soldiers and kids to talk basketball and life in between sessions at the Fort Hood physical fitness center. Team Burba Elite topped Team Takeover, 20-17, to win the title, a battle between #1 seeds previously unbeaten in the tournament.

“360 Hoops is proud to support the outstanding men and women of Fort Hood by bringing our brand of basketball to the post,” said 360 Hoops CEO Archie McEachern. “We can’t thank them enough for allowing us to share our vision of the game and provide a day of competition to these amazing individuals.”

The day began with a youth clinic for kids ages 7-13, introducing the youngsters to the three-basket format and focusing on some fundamentals applicable to full-court basketball as well. Then 12 teams took to the three courts for several hours of action.

360 Hoops, the brainchild of Shane Brey and fellow co-founder Anthony Gomez, is an exciting, inclusive addition to the shape of basketball at all levels, incorporating a three-on-three, three-basket game played on a circular court. Teams compete on the circular court, which features a proprietary single stanchion with three regulation baskets facing away in each direction. Players can score for their teams in any of the three baskets.