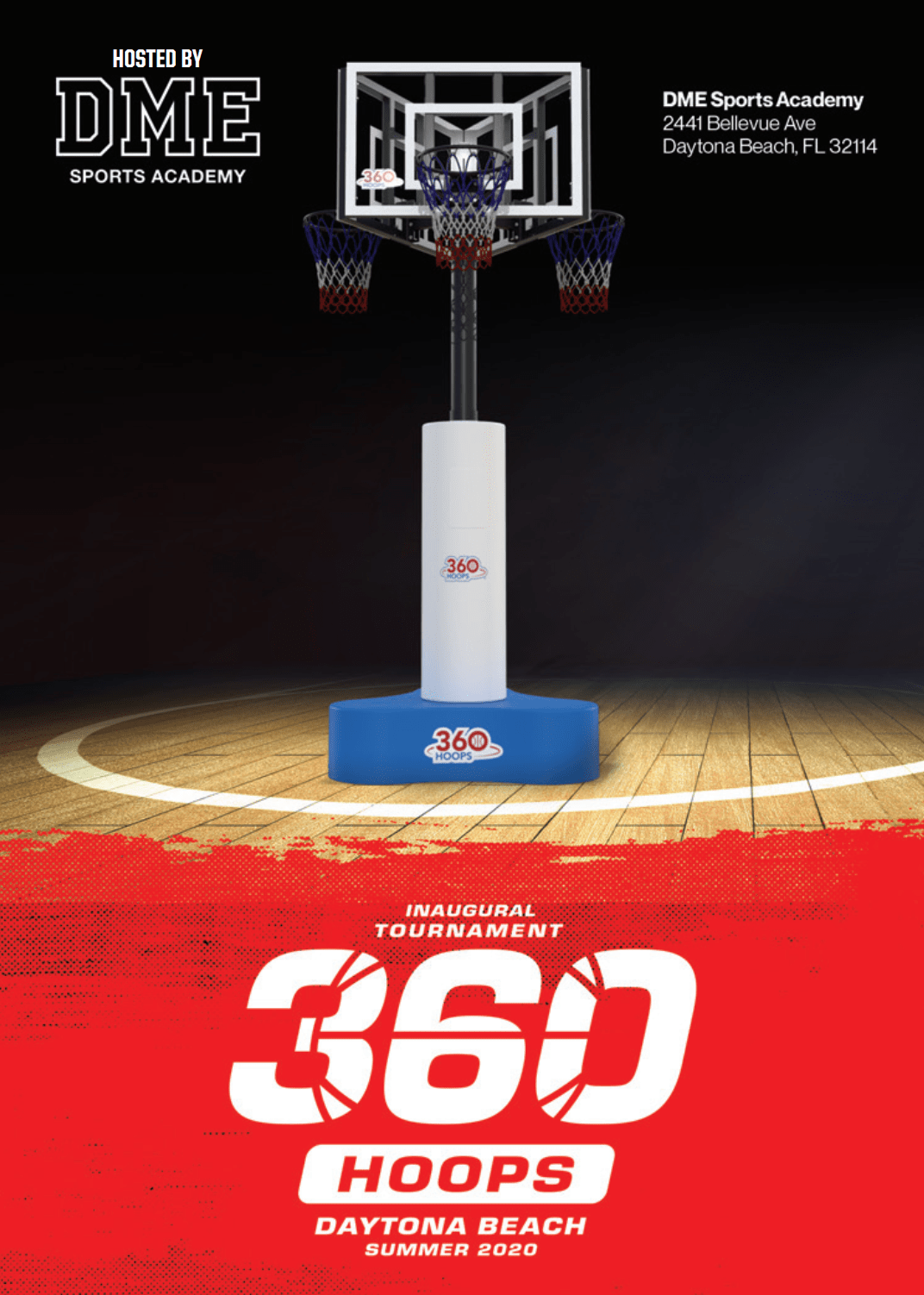 “The 360 Hoops program lets more kids have more fun with basketball at a younger age. The 360 Hoops Invitational will help us spread the word of how this amazing new version of basketball provides a great, fun workout for players, entertaining action for fans and an amazing opportunity for schools, parks and recreational organizations, resorts and other athletic facilities to enhance their offerings in an engaging new way.” -Shane Brey, Co-Founder

DAYTONA BEACH, Fla., July 22, 2020 – In what may be the most innovative addition to basketball since the three-point shot, play opened Tuesday in the Inaugural 360 Hoops Invitational, a tournament showcasing a three-on-three, three-basket, three-team circular court form of the sport, continuing through Saturday at DME Sports Academy  (2441 Bellevue Ave., Daytona Beach). From elementary school age kids up to elite men and women, 360 Hoops is an exciting, inclusive addition to the shape of the game at all levels.

In 360 Hoops, three teams compete at a time on the 30-foot diameter circular court, which features a single stanchion with three regulation baskets facing away in each direction. Players can score for their teams in any of the three baskets, and the three-team format allows for brackets to efficiently reduce while ensuring all teams get adequate court time. Moving without the ball is a key skill, ensuring a great workout while competing.

“DME Sports programs are constantly involved in the testing and research of new products and services. Video cameras are built into the backboards and there are several other cameras that provide a 360 video experience. Also, we’re excited that DME Academy players will participate alongside others.” -Mike Panaggio, Co-Founder & Owner, DME Sports

Tuesday’s play at the Invitational began with co-ed elementary age kids. Middle school boys and girls events will follow Wednesday at 6 p.m.; High School age take the court on Thursday (girls) and Friday (boys) at 6 p.m.; elite former collegiate athletes have their own bracket on Saturday at 9 a.m., followed by elite men at 1 p.m. and elite ladies at 6 p.m. All events are being conducted under strict COVID-19 protocol, including masks, frequent handwashing, facility access limited to athletes and staff only, daily temperature readings, social distancing and other practices.

360 Hoops Invitational games will be streamed live via the 360 Hoops YouTube Channel, with the Elite finals set for tape-delayed national TV broadcast, produced by Emmy-Award winning producer Harry Cicma. Innovative camera angles and technology, including 360 VR, will be incorporated into the broadcast.

360 Hoops (www.play360hoops.com) is the most innovative addition to basketball in decades! Our versatile design engages more athletes in a smaller space, gives a more intense cardiovascular workout, and nurtures essential skills for success on and off the court. Whether you have limited space, need more hoops, or are looking for an exciting new edition to your program, 360 Hoops will be a great benefit.

Co-Founder Shane Brey originally designed our hoop to engage more kids in a smaller space. However, after showcasing our hoop in many states across the nation we have discovered it to have more applications. A 360 Hoop develops fundamental basketball skills while nurturing essential life skills like teamwork, communication, and friendly competition.

Within our world class facilities, DMESA (www.dmesportsacademy.com) provides high level instruction and competitive opportunities to advance athletic development for our student-athletes, while inspiring character and discipline to better our community.

Family is the source for the contagious passion for sports that founders Mike and Dan Panaggio bring to DME Sports. They were introduced to basketball as children by their father Mauro Panaggio. The brothers cultivated a lifelong love and appreciation of the sport which drove much of their success both on and off the court. Dan followed in his father’s footsteps becoming a top flight basketball coach himself and enjoying an illustrious career that has stretched over 40 years.  He has excelled at every level of the sport, working with top high school players and college talent, including some of the best minds in the game like Hall of Fame coaches Phil Jackson and Tex Winters.