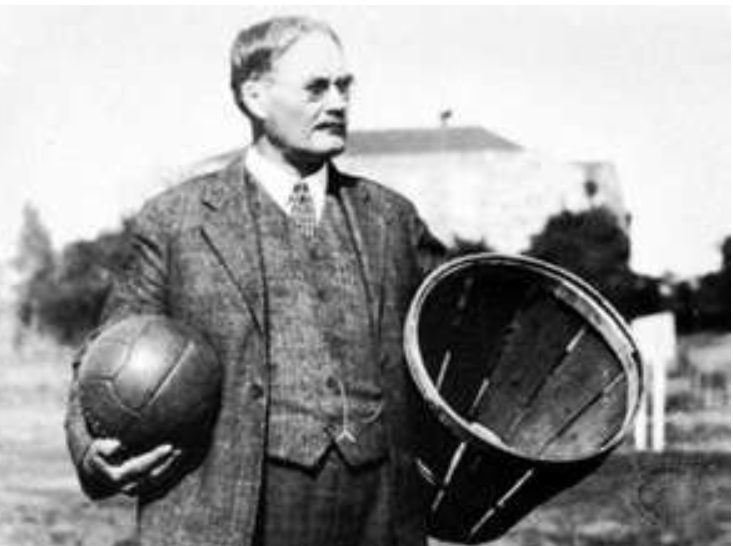 Basketball was first invented by Dr. James Naismith (pictured above) in Springfield, Massachusetts during a cold winter in 1891.Many know the story of Dr. Naismith attaching peach baskets to the end of each gymnasium. He later wrote out the “13 Rules of Basketball” and the rest is history.

In those early years of the sport, baskets were so infrequently made, there was a jump ball at center court after every score, which was still a peach basket, not a rim with a net, like today.

No videos exist of the first games more than a century ago, and one watching those games would certainly not recognize the fast pace, dunks, no look passes, mesmerizing dribbling, deep jump shots, flopping, alley oops and many other things that have changed over the past 127 years in the sport of basketball.

Over the years there have been countless innovations in basketball. One includes the innovative jump shot, rather than a set shot, something often overlooked although it was a major change in the game. Other major rules changes have been the widening of  “the lane” or “the key”, eliminating goaltending and the implementation of a “charging” foul, led by DeMatha Head Coach Morgan Wootten.

More recently, it has been the shot clock and the 3 point line that has impacted the way basketball is played more than any others. There have been many other changes, such as rules concerning fouls, goaltending, and possession. Additionally, the growth of the professional & collegiate basketball leagues, women’s & international basketball, the proliferation of youth teams, leagues, tournaments and summer camps and the coverage of basketball on television, the internet and elsewhere.

But in the more than 125 years since the sport of basketball was invented, there hasn’t been any innovation or invention quite like 360 Hoops. Dr. Naismith put two baskets at the opposite ends of a rectangular gymnasium. In the 21st Century, the style of play and rules have continued to change but the shape of the game is the same.

360 Hoops has changed the shape of the game. Playing with 3 baskets on a single pole in a circle rather than with a basket on each end of a rectangle is an innovation like no other in the history of basketball. When one plays on a 360 Hoop, or watches players in action, they immediately recognize the genius of 360 Hoops creator Shane Brey. Visit our website to learn more about why everyone is talking about 360 Hoops!